Our Ranger Edition Ford Bronco by Velocity brings in those iconic styling elements and blends them with modern materials and engineering to produce something that is at once classic yet powerfully refined.
LEARN MORE SHOP NOW

For over a decade, the Ranger Edition classic Ford Bronco was the pinnacle of rugged, American style.

Our Velocity Ford Ranger Edition Bronco pays homage to the inspiring design of the classic Ford Bronco by including iconic styling cues both inside and outside this beautifully honed machine. Our mission is to merge the past and present in a way that no other builder in the United States can and the Velocity Ranger Edition Ford Bronco does exactly that. On the outside, we’ve included the iconic white and orange striping from the first generation Ranger Edition Ford Bronco on the hood, and on the sides. This, combined with your choice of stunning Glasurit paint endows the Velocity Ranger Edition Ford Bronco with a rugged, yet refined appearance that bridges the present and the past with true American craftsmanship. In addition, all Velocity Ranger Editions include a Wimbledon White roll cage, front bumper, and rear bumper. 17-inch Wimbledon White “Steele” wheels set off the stance and they come wrapped in all-terrain tires. Inside, any fan of classic Broncos will immediately recognize our custom-tailored bucket seats finished in a beautiful custom vinyl that’s perfectly set off by a Ranger Edition-inspired seat insert. The design of the seat insert is carried to the custom floor, where it wraps over the transmission tunnel, just like the carpeting did on the classic Ford Bronco Ranger Edition. Matching seat belts and gear selector boots and safari top are just some of the small touches that make this interior really stand out. Under the classic hood, we’ve given the Ranger the heart of a true bucking Bronco with a Coyote V8 that can launch the Ranger Edition Bronco to 60 mph in only 5.1 seconds. Velocity custom builds headers and exhaust for their builds, ensuring the highest level of performance and a thundering sound that is a perfect match for this rugged, yet refined vehicle. Every Ranger Edition Bronco by Velocity is custom tuned on our in-house Dynojet before heading out to clients. This ensures a level of refinement and performance that is unheard of in the custom industry. 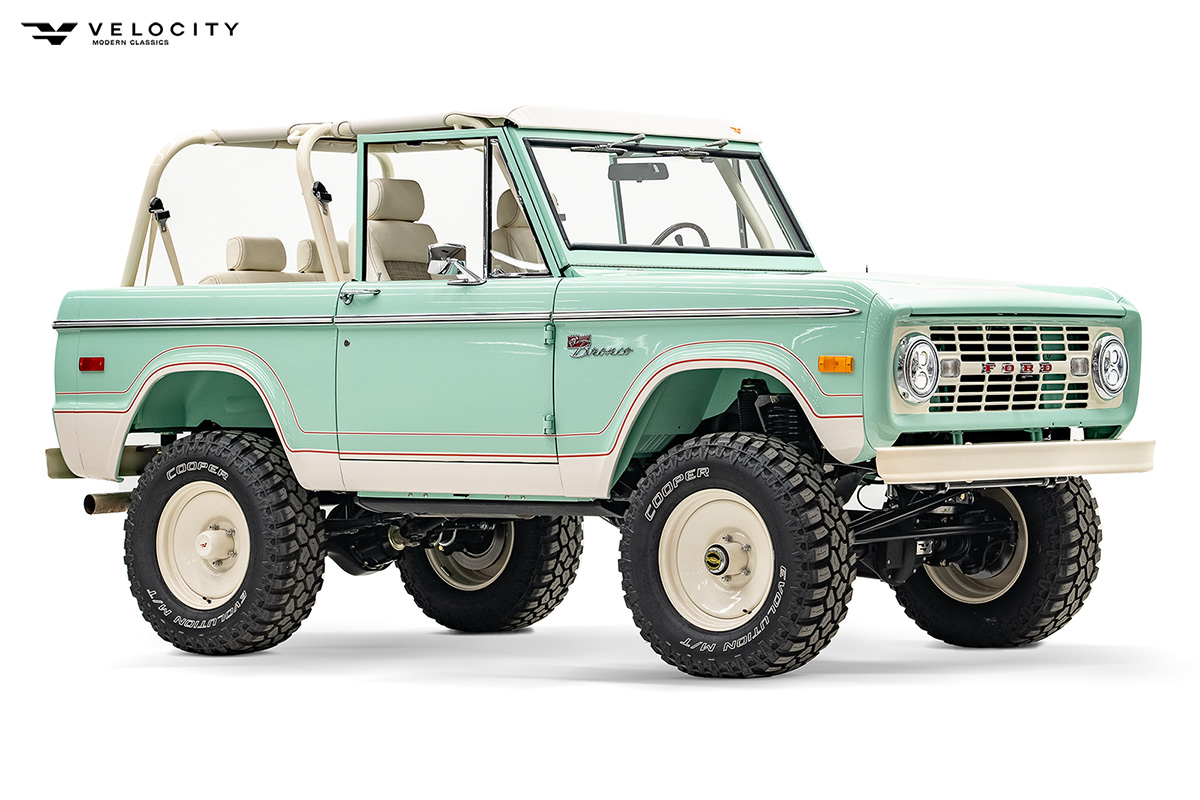 To learn more about our Ranger Edition Broncos and how we can build one for you please use the form below.