Made for More, Built by Velocity…An International Scout you won’t want to miss 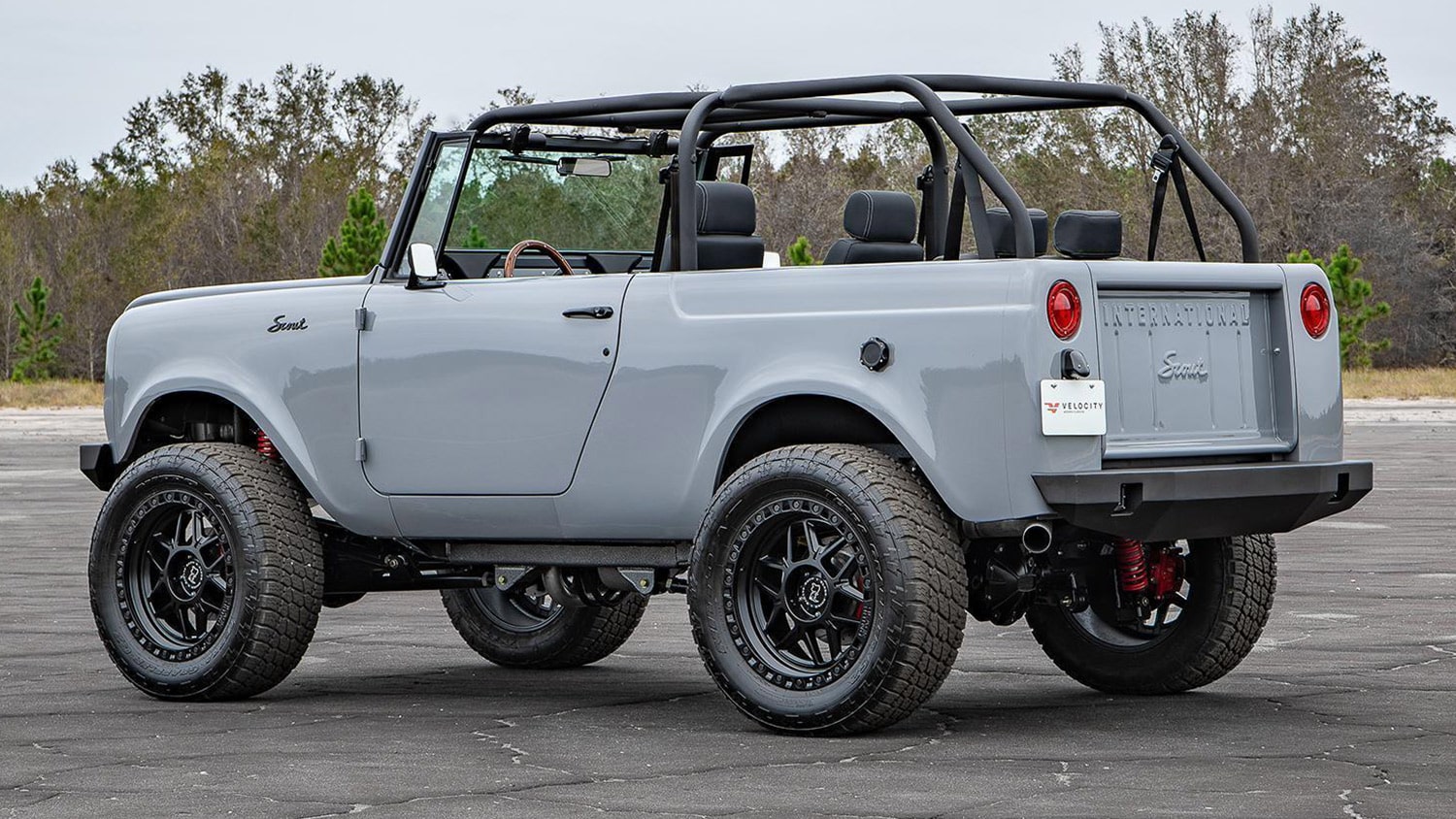 The automotive landscape of 1964 looked much different than it does today. Muscle cars were beginning to cement their place in the American heart, and sedans and station wagons were the choice of families who needed something to carry people and their stuff. Unlike today, SUVs and pickup trucks were not mainstream family vehicles. They were purpose-built to do a job, do it well, and allow their owners to have some fun in the process. In fact, since 70% of new vehicles purchased in America today are SUVs or mid-sized trucks; the soul of the SUV is buried so deeply in the heart of today’s car-based people haulers, that very few vehicles are able to retain that original magic. The International Scout is one that still makes the cut.

For those looking for that real, old-soul of an SUV, the International Scout is a shining example of a time when SUVs did more than just run to the grocery store. Although it saw a few changes over the years, the original International Scout 80 (sold from 1961 – 1965) remained a no-frills work truck that was highly capable both on the road and through rougher terrains. Built as a competitor to the Jeep CJ 4×4 (a descendant of the Willy’s Jeep commissioned for World War II), the Scout 80 had features like a removable top, removable side windows and an interior that was less spartan than the CJ of the same era. People loved them and in just over four years, International went on to sell over 100,000 Scout 80 SUVs. The modern SUV was officially born. A Classic International Scout with a Modern Touch

The team at Velocity had an amazing opportunity to put their classic but modern touch on this commissioned 1964 International Scout. To bring this modern classic into the 21st Century, the craftsman at Velocity had their work cut out for them and the final result is nothing short of incredible. Simply put, there is no International Scout in the world today with this level of modern-day drivability, performance, and luxury appointments. This project showcases Velocity as the leader in bringing vintage attitude and modern engineering prowess together as no one else can.

This Scout is one of the first in the country to feature the incredible new, Gen V LT1 engine. You read that right. The horsepower experts at Velocity installed the high-revving, free-breathing, small-block V-8 that debuted in the C7 Corvette into a vehicle that was once powered by an anemic, 4-cylinder engine. The sound of this engine is music to any enthusiast’s ears and trust us, it moves this International Scout build with authority. Power flows through a performance built, 4L60E transmission that offers quick shifts and fantastic reliability for the long haul. The soul of the powertrain is homegrown in our shop but the quality and drivability are world-class. Power is nothing without a way to get it to the ground and this custom International Scout delivers. The legendarily tough Atlas transfer case, twin Dana 44 axles, and Nitto Grappler tires on Black Rhino wheels put the high-revving fury of the LT1 engine down to the ground with ease. Chassis upgrades include a custom-engineered 4-link design that folds in Radflo coil-over shocks and hydro-boost brakes. Power steering gives this restored International Scout a modern feel on the road. Part of what sets Velocity apart from other restoration shops is the ability to provide these types of modern upgrades without sacrificing drivability, and this custom Scout build performs with a well-built precision that places it in a class of its own.

The custom metalwork on this restored International Scout 80 is a testament to the detailed in-house fabrication that Velocity is capable of. Their team of incredible metalworkers have custom fabricated a bespoke 4-point sport roll cage that is powder-coated to match the matte black accents found throughout the exterior. Handcrafted, Velocity exclusive bumpers with integrated LED cube lights accent the rugged exterior while underneath the skin, our metal craftsmen custom-built a new core support and firewall and custom steering components. They’ve even removed part of the original B-pillar and custom fabricated new supports so that the client could enjoy a seat that slides and reclines back further. Even the dash is custom fabricated and sets the tone for an interior that’s sure to stun you. Once you step inside, you won’t believe you’re in a 50+ year old vehicle with utilitarian heritage. A hand-stitched, black interior with paint-matched hexagon inserts looks like something found on some of today’s most prestigious luxury vehicles. The Pioneer touchscreen audio system and Kicker speakers provide fantastic sound quality (just in case you get tired of listening to that GEN V LT1). A Vintage Air A/C system keeps things nice and cool with modern dash vents – all part of this incredible, custom- fabricated metal dashboard. Dakota Digital gauges also bring a dash of modernity into the instrumentation of this custom Scout. This is a prime example of Velocity’s ability to blend modern interior conveniences and luxury into something classic that still somehow looks like it belongs in 1964.

From its first of its kind Corvette powered engine to the extensive custom metal-work and bespoke, luxury interior; this commissioned 1964 Scout build shows what all can actually be accomplished when passion and creativity come together.

This Scout was built by the hands of the industry-leading professionals that are fanatical about producing vehicles that defy the status quo by breaking the boundaries of what’s really possible. The team at Velocity transformed this 1964 International Scout that started off as a basic, utilitarian vehicle to a high-performance modernized machine outfitted with levels of luxury and quality that you could never dream of in 1964. This skillfully-restored Scout is a prime example of what makes Velocity stand-out as one of a kind and cements them as leaders in the automotive restoration industry. Contact the team at Velocity to see how they can take your Scout build to the next level. To view more of Velocity’s classic Scout restoration projects, visit https://bit.ly/VelocityScoutRestos.