Restoring An Icon: What Are The Best Scout Years?

Take one good look at the tough-as-nails appearance of any of the International Harvester Scout or Travelall and you’ll see one of the most influential vehicles ever made. Why? It’s arguably the world’s first modern SUV!

When you look out at the sea of automobiles that crisscross America’s interstates and stand guard in suburban driveways, one thing is abundantly clear; we’re obsessed with SUVs. From car-based, unibody SUVs that are essentially taller hatchbacks to full-blown, off-road-ready monsters like the recently refreshed Ford Bronco – we love our SUVs. What most modern drivers don’t realize is that this obsession with rugged driving, rugged-looking vehicles is not all that entirely new.

In fact, it really all started in the 1960s when International Harvester brought a legit contender to mar

ket that would captivate an entire generation of SUV-obsessed fans! So, if you’re looking to get your hands on one of these amazing vehicles today, you’re probably wondering what the best Scout year is. Don’t worry, we’ve got you covered:

At Velocity, we absolutely love refreshing these unique vehicles into modern marvels and we think you’ll find plenty to love in this originator of originators.

Think you’re ready to explore the world of the International Harvester Scout? Then let’s get rolling!

The original 1960 International Scout had to make our list because, well, it’s the original! This vehicle was meant to take on the Willy’s Jeep of the era that was seeing an increasing amount of popularity due to the “outdoor lifestyle” movement but with an entirely different take on the familiar concept. Originally, these vehicles were billed as low-cost transportation that could transform in minutes from a pickup truck, to a station wagon, and then back to something that you could drive to work in the morning!

Originally powered by a simple, tough, and slow 4 cylinder powerplant – the 1960 Scout was no speed demon with only 93 horsepower on board. It was available in a removable hardtop, a soft-top, and a “travel top” which basically covered the entire bed of the Scout, added in a bench seat, and turned it into an SUV. That would be the first modern SUV ever sold in America!

With features like vacuum-powered windshield wipers and a fold-down windshield, the 1960 International Harvester Scout 80 instantly upped the cool factor to another level entirely and made this basic runabout super desirable and it was a HUGE hit. IH sold over 100,000 in just over 5 years!

Finding a Scout 80 in good condition can be very difficult, but if you can, an accomplished builder like Velocity Restorations can take this bare-bones beauty and turn it into a masterpiece of modern engineering.

If you’re thinking that the Scout II is the most iconic version of this amazing vehicle, you’d probably be right! From the rugged good looks to the upgraded interior and available V-8 power; the IH Scout II is one of the desirable and popular Scout models. For our taste, the 1973 model embodies everything the Scout does incredibly well and carries along with such iconic styling elements as the 14 bar grill and round headlights.

Much like the previous version of the Scout, you could get the Scout II with a Traveltop (hardtop), roadster, or soft top. The soft top is exceedingly rare, but the roadster and Traveltop are much more accessible for purchase on the open market. One huge benefit of the Scout II is the wide availability of parts and the flexibility of engine choices, transmissions, and chassis upgrades that allows professional builders like Velocity to create restomods that will make your jaw drop.

Want to see a beautiful example of a 1973 IH Scout build? Check out our recently completed 1973 Brittany Blue Scout II: By the end of its run, IH was looking for ways to expand the Scout family beyond its original concept: Enter the International Harvester Scout II Traveler. What makes the Scout II Traveler so incredibly unique is the additional 18” of wheelbase that pushed the Scout II from a smallish SUV to a full-fledged, cargo-carrying machine, complete with hatchback-style liftgate, that was right at home on the campsite, or in suburban driveways. I mean, this thing had 108 Cubic Feet of storage space!

It nabbed 4 wheel magazine’s “4 Wheeler Of The Wheel” and was an immensely popular alternative to the (also brand new) Jeep Cherokee. Take a good long look at the Traveler and you can see the modern SUVs D.N.A. 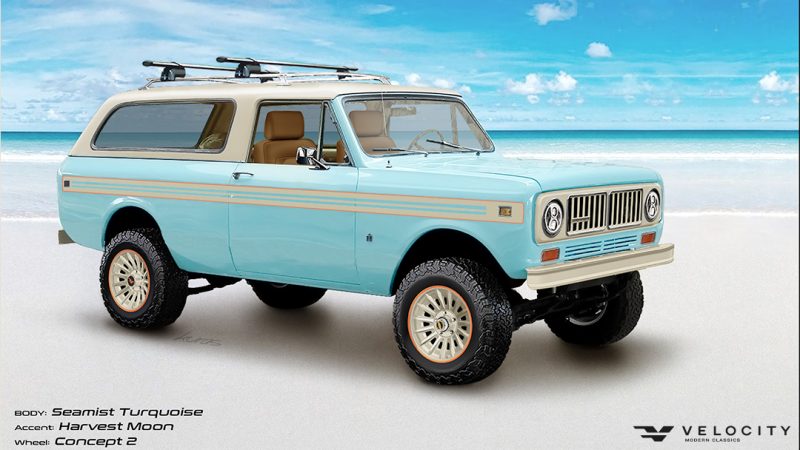 As we speak, Velocity is putting its own unique spin on a Scout II Traveler that will blow your mind. These are fairly rare, so you’re definitely going to want to keep your eye on our social media accounts when our take on the Traveler hits the streets.

Okay, we’re cheating here a little bit because this isn’t really a Scout but that won’t matter once you get your eyes on this incredible behemoth. We think it has all the nostalgic cool of the Scout while upping the practicality quotient to another level entirely.

Of all the vehicles that laid the foundation for the modern SUV, the International Harvester Travelall stands tall above them all. Believe it or not, the Travelall was around from 1953 to 1975, spanning 4 generations! It was built as a direct competitor to ubiquitous GMC Suburban, and as an alternative to the full-size American wagons that were so prevalent in American homes.

We love the third generation because of its iconic styling (just look at that grill) and classic overall proportions!

What’s better than a 1963 IH Travelall? How about a 1963 IH Travelall that’s been created by the automotive geniuses at Velocity!? Yes, we’re currently building out an unbelievable Travellall that will take the original mission of this vehicle and completely turn it on its head. You won’t believe your eyes when this thing hits the streets – it’s going to be epic!

It’s a shame that the IH road car division wasn’t able to make it past the turbulent late 1970s because who knows what they would have gone on to produce! Their ideas, their execution, and their marketing all seemed just a little bit ahead of their time. Today, finding an International Scout or Travelall in good condition has become increasingly difficult, as the classic car market has really wrapped its arm around these unique vehicles.

From the plucky Scout 80 to the iconic Scout II, there really isn’t a bad year for this ultra-unique vehicle!

Velocity has had the opportunity to build several incredible International Harvester Scouts over our time as a leading builder. While the original International Harvester Scouts were, let’s just say, basic and utilitarian; Scouts that come from the house of Velocity will make your head spin. From LED headlights and LS V8 power to luxurious interiors with modern electronics that would put a luxury car to shame – we give all the nostalgic feel of a Scout, without any of the nostalgic compromises. Our Scout modernization process includes a Velocity exclusive chassis design that’s custom-engineered for all the unique models of the Scout and includes a custom fuel tank, and custom gearbox as well. Are you the kind of person who likes to get their hands dirty or do you own a shop that restores Scouts for customers? We’ve solved one of the most pervasive issues with Scout builds by creating a rolling chassis that is unique to the Scout. Our VS2 Custom Rolling Chassis starts with a CNC laser-cut premium boxed steel frame with braced rails, 4-link front and rear suspension, custom-valved shocks, and Afco coilovers. The brand new Dana 44 front axle with Warn locking hubs and a Dana 60 rear axle with Trac-Loc provide proven 4-wheel traction, while front and rear Wilwood discs stop with authority. Step up to the VS3 Custom Chassis and get a 430-hp LS3 V8 and 4L60E auto transmission, plus a two-speed Atlas II transfer case to put the power down.

Velocity even carries a full line of Scout Merchandise so you too can show the world just how much you love the Scout! So whether you’re looking to buy one already completed, commission a custom build that meets your every need, or rock some amazing Scout merchandise – Velocity should be your first and last stop for all of your Scout needs.